Go Directly To Rewards
Welcome to the PledgeManager for Raccoon Tycoon: The Fat Cat Expansion!
If you missed our campaign, don't dismay! Just choose an option below.

What have game reviewers been saying about Raccoon Tycoon?

Check out these advance previews of the expansion...

...and these review videos of the base game!

Countries Excluded: We are no longer able to ship to Afghanistan, Brazil, Russia, South Africa, South America, Mexico, or the Middle East due to high postage prices, and lost parcels. If you live in one of these areas, we recommend you use a USA address and have the game forwarded to you via a relative/friend or postage forwarding company. We continue to work with different fulfillment centers all over the world to ensure better and more affordable delivery each campaign but none will guarantee delivery to these countries.

Forbidden Games would like to invite you to join our demo team, ‘The Guild of the Forbidden.' We are looking for people that love to play and teach games. As a Guild member you will organize demonstrations and play-sessions of Forbidden Games in your local game stores, cafes, conventions, and other gaming forums. In return, you will collect points that will earn you unique Forbidden Games swag and other rewards. If interested, contact:

Glenn Drover was the founder and president of Eagle Games, Inc. from 2000 – 2006. During that time he ran the company while also designing and publishing several premium board games, including Railroad Tycoon, Age of Mythology, Conquest of the Empire 2, Sid Meier’s Civilization, Attack!, and others. In 2007 under his private Tropical Games label, Glenn also designed and published Age of Empires III: The Age of Discovery, which enjoyed great commercial and critical success.

Annie Stegg Gerard has a special love for the 18th century Rococo painters who have had a large influence on her own method. She finds inspiration in their imagination, and the dreamlike palette and lively brushwork that combine to create a wonderful atmosphere of enchantment. She believes that they sought to transport us to different worlds and fantastic places though their works. In her own work, known for its beautiful, enigmatic figures and lively creatures, Annie strives to depict this same transportive effect to the viewer. She and her husband live in Northern Georgia with their twin boys, dog, and two cats.

Jacoby O'Connor is a freelance graphic designer living in the far western suburbs of Chicago. He first started working on board game projects 18 years ago while working for a small graphic design agency where his first project was Glenn Drover's American Civil War followed by War! Age of Imperialism, Railroad Tycoon, Age of Mythology, Conquest of the Empire 2, Sid Meier’s Civilization, Attack!, Napoleon in Europe, and others. Since then he has been the graphic designer on many other titles such as the North Star Games hits Wits & Wagers, Say Anything, and Evolution. His latest projects were Glenn's WarQuest and North Star's Blurble.

Sean Brown has worked in the game industry for almost 13 years, half of them for Eagle Games as a salesmen, co-designer, graphic artist, marketing director, developer, and warehouse manager (many at the same time) and half of them for Mr. B. Games as the President. He has worked on Alien Uprising, Spurs, Realm of Heroes, Zothren Invasion, Posthuman, Days of Ire, Madness at Midnight, WarQuest, Liars Dice, Prospectus, Helionox, Hellenica, Panic, Aviation Tycoon, and Clockwork Kingdom as a designer, developer and/or graphic artist for Mr. B. Games as well as the following titles via graphic art, development or co-design work while at Eagle Games: Age of Steam, Age of Empires III, Attack Deluxe, Baltimore and Ohio, Brass, Defenders of the Realm and all of its expansions, Defenders Battlefields, Empires Builder Expansion, I'm the Boss TCG, Incan Gold, New England Railways, Pirate Dice, Railways of the World and all of its expansions, Roll through the Ages, Through the Ages, Tumblin' Dice, and Wizards Brew.

Forbidden Games has distributor and warehousing relationships worldwide, including the U.S., Canada, China, Australia, Europe, and the UK.

Forbidden Games is a (fairly) new board game developer/publisher founded by two veteran game designers and entrepreneurs: Jason Kapalka, a co-founder and chief game designer at PopCap, makers of video games such as Bejeweled, Peggle, and Plants vs. Zombies, and Glenn Drover, the founder of Eagle Games and designer of numerous board games including the tabletop versions of Railroad Tycoon and Age of Empires III.

Shipping will be collected after the campaign via our Pledge Manager.

Countries Excluded: We are no longer able to ship to Afghanistan, Brazil, Russia, South Africa, South America, Mexico, or the Middle East due to high postage prices, and lost parcels. If you live in one of these areas, we recommend you use a USA address and have the game forwarded to you via a relative/friend or postage forwarding company. We continue to work with different fulfillment centers all over the world to ensure better and more affordable delivery each campaign but none will guarantee delivery to these countries.

PLEASE NOTE: Damage may occur during transit by the various shipping carriers used. We wish this was not the case, but it can happen. Shipping Carriers pass their fees along to us; we do not set high postage rates. We subsidize all shipping and handling costs from our profits to help lower these costs for you, our backers, because it is important to us to help spread the word about our project and help our games and our company grow. We are a small business that relies on shipping companies to fill our Kickstarter campaigns.

PLEASE email our Customer Service for any missing parts after you have your reward at simon{at symbol}forbidden.games - Our fulfillment CS is mrbgames.cs{at symbol}gmail.com if you have major issues with delivery/loss/damage that cannot be resolved with the carrier (i.e. always try your local post office first) and we will help assist you in resolving them. We will need your backer number, address and backer name in the email.

Customs "Friendly?" - Our shipping prices include customs and VAT. We will make the best shipping choices for your rewards. In addition to the U.S., we also ship parcels from warehouses in Europe, the UK, Canada, China, and Australia. This allows us to minimize customs paperwork for those in those regions/ nations. However, we reserve the right to ship parcels from the USA or China if quantities ordered outside the USA are not large enough to facilitate pallet shipments. We will let folks know via an update if we ship from the USA and offer invoices to help with customs if need be.

There are many advantages to using PledgeManager, such as late add-ons, the ability to change your address as much as you like until we lock them, and a more accurate cost for you, the backer, on delivery costs. We also plan to ship in 3 waves. The first will be to those who fill out their pledge managers by our announced cut off date. Wave 2 will follow shortly after, with a final Wave after that.

If for any reason you feel you have a missing item or damaged item, please email us at mrbgames.cs{at symbol}gmail.com with photos of damage, your backer number, backer name, and complete address and we will work to replace the missing or damaged items ASAP. Do not post in the comments or other forums as we may miss them or be delayed in replying. 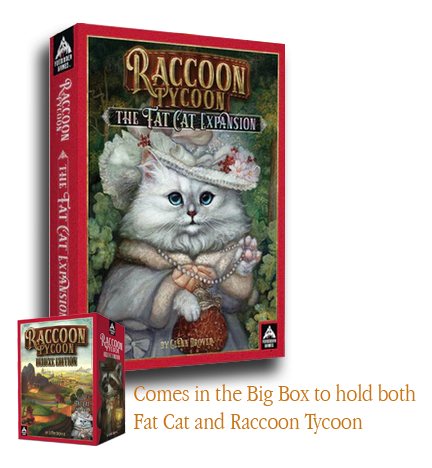 1 copy of the Limited Premium Kickstarter Edition of the Fat Cat Expansion for Raccoon Tycoon plus all unlocked stretch goals. This will come in the Big Box!

Note: This Premium Edition of the Fat Cat Expansion will contain exclusive content, and will not be available after this original limited print-run. 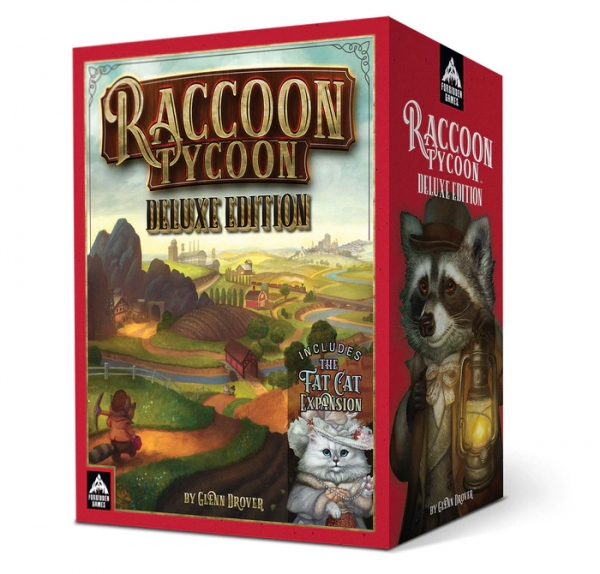 Note: The Premium Editions of Raccoon Tycoon and the Fat Cat Expansion contain exclusive content, and will not be available after this original limited print-run.

One last step to go!

Share your email, we will send you an invite!

If you're already have a PledgeManager account from another project, just sign in using the button below to join the project.

Complete your information below and we will send you an email to get started!